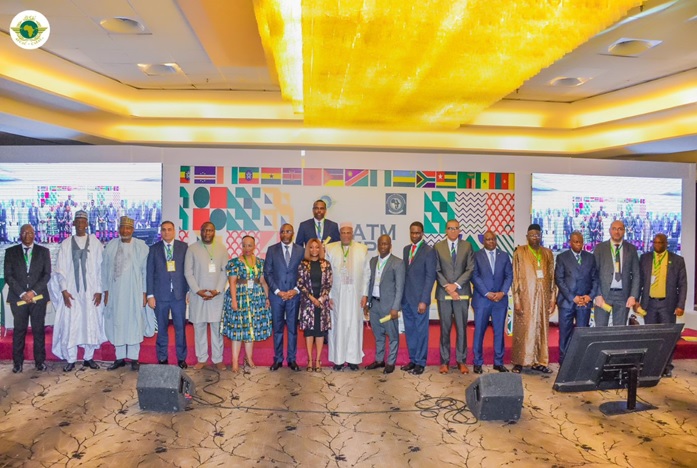 Dakar, Senegal: November 14, 2022: 15 African Ministers of Transport and Aviation today, 14 November 2022 met in Dakar Senegal to launch the Single African Air Transport Market (SAATM) Pilot Implementation Project (PIP). The project was launched by the Honourable Minister of Rail, Road and Aviation of the Republic of Togo H.E. Affoh Atcha-Dedji who is the Champion State of SAATM, with the Honourable Minister of Aviation and Airport Infrastructure of Senegal H.E. Doudou Ka as Chief Host.

The 15 SAATM States are the States that have been identified with favourable environment to proceed with SAATM implementation. They are Cabo Verde, Côte d’Ivoire, Cameroun, Ethiopia, Ghana, Kenya, Morocco, Mozambique, Namibia, Nigeria, Rwanda, Senegal, South Africa, Togo and Zambia. All these States have domestic carriers eligible to participate in the SAATM.

The event also provided the opportunity for higher engagement with Member States on the Full implementation of the YD and SAATM in order to contribute to the African Union (AU) Agenda 2063. In setting the scene for the event, the Secretary General of AFCAC Ms. Adefunke Adeyemi informed that AFCAC in collaboration with all the stakeholders would proceed with clear actions and timelines to achieve SAATM implementation.

Towards this end, AFCAC will generate more publicity with enhanced visibility to raise further awareness amongst stakeholders of SAATM activities and a dedicated section of the AFCAC website will spotlight the SAATM States and celebrate their efforts while encouraging new States to sign up to SAATM.

The study also assessed the level of the Yamoussoukro Decision (YD) implementation and the efficacy of SAATM operationalization for each Member State and arrived at a “preparedness” rating using the SAATM enablers. A SAATM enabler is a stand-alone air transport feature or policy that contributes to the holistic aviation framework, which acts as essential ingredient that leads to a successful aviation sector. These 15 States met the favourable environment for successful SAATM implementation.

It will be recalled that the YD entered into force in July 2000 following its endorsement by the African Heads of State and Government in Lomé, Togo. The main objective of the AU leaders was to improve connectivity and integration of the Continent through liberalization of scheduled and non-scheduled air transport services within Africa and removing all restrictions on traffic rights, capacity and frequency between city pairs for all African airlines.

The launch of SAATM as the first flagship project of the AU Agenda 2063 on 28 January 2018 is considered as a turning point towards the full liberalization of air transport market on the continent. Today’s event is meant to accelerate the implementation of the YD leading to the full and sustainable implementation of SAATM. It is expected that the activity will culminate in these member States aligning their respective Air Service Agreements (ASAs) during the ICAN2022 event scheduled for Abuja, Nigeria in December 2022.

So far, 35 member States have subscribed to the Solemn Commitment to unconditionally implement the YD and SAATM and 21 States have signed the Memorandum of Implementation (MoI) for its operationalization and implementation. It is estimated that these 35 States account for over 85% of intra African traffic and over 800 million of Africa’s 1.2 billion population.

With this launch, it is further expected that Member States’ eligible airlines would take advantage of SAATM and expand their operations across Africa and all partner institutions would join hands in the implementation of SAATM. States are to fully open their air transport markets immediately to each other and without conditions and also promote air transport sustainability through Safety and Security regulatory framework while adhering strictly to ICAO Guidance and Policies on taxes, charges and fees.

With the uunveiling of this pilot project of ready and willing African States that have requisite SAATM implementation enablers and with the overall benefits associated with the liberalization of the African air transport through the YD, including air transport’s contribution to the AFCFTA to facilitate intra-African trade, this will elicit the commitment of member States that have not yet signed the Solemn Commitment to sign up.

The Single African Air Transport market (SAATM) that was launched on 28 January 2018 currently has 35 member states signatory to the Solemn Commitment.

20 out of the 35 member States have further signed a Memorandum of Implementation to remove restrictions in existing Bilateral Air Services Agreements (BASAs) that are contrary to the Yamoussoukro Decision (YD).

In order to eliminate safety deficiencies and enhance aviation safety in the AFI Region, African Civil Aviation Commission (AFCAC) with the technical support of ICAO started the implementation of the AFI-Cooperative Inspectors Scheme, the AFI-CIS project.